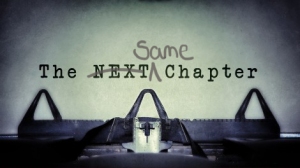 This past Wednesday was just another routine oncology appointment. Into the exam room walked a very dapper White Russian. I’ve only ever seen him in his white coat, but the other day he sported a yellow v-neck sweater, a navy and white checked shirt and a yellow tie with stripes in various shades of blue, all wrapped up in a natty tweed blazer. I commented on his Soviet swag, to which he replied he had lost weight and his coats were too big. He was waiting for his order of new coats to come in, but had gotten so many compliments that he was thinking of cancelling the order.

Once the fashion discussion was over we got down to business. And he started the real conversation with, “There was a study…”

I really hate those words. They usually don’t bode well for me. Which is ridiculous because the reason I and my mother and countless other cancer survivors are healthy and/or alive is because there was a study. But the last few times I was told there was a study it meant something I had been working for, something that was at my fingertips, something I was happily looking forward to was yanked from my grasp.

Here is the opening paragraph of a press release regarding this study from the San Antonio Symposium held in December:

You can read the whole press release HERE.

Basically it says that there was a decrease in recurrence and/or death rates in the second decade (10 to 14 years) after diagnosis for women with estrogen receptor positive cancer who remained on Tamoxifen for ten years instead of five years.

The White Russian went on to tell me that his daughter is a fellow at Sloan Kettering in New York and their team determined (as is also mentioned in the press release) that this practice should extend to all adjuvant hormone therapies, i.e., Arimidex.

I’m not sure if it was my expression (I am happy to report I was not about to burst into tears, however I bet there was a “you can’t make me” look on my face) or if he really wasn’t sure this was the right course for me, but we talked about it at length. When I told him I often wondered if my issues were side effects or just a matter of my age he told me that I’m too young to have these issues. He also said that quality of life is sometimes more important than reducing a recurrence by a couple of percentage points.

This is a great example of why I am so fond of this doctor. Where I tend to downplay my discomfort and fatigue and myriad other annoyances, he justified them as real and life-altering problems that I shouldn’t be forced to deal with if I don’t have to. Well, that and when he said I was “too young”. I liked that part, too.

So we came up with a plan. I am no longer on the Arimidex and we’ll revisit this in six months. I wasn’t even disappointed that I have to go back in six months again, even though this was supposed to be my last six month appointment. It takes about three months for the Arimidex to be completely removed from the body. Hopefully I will notice a difference in the second half of these six months. If so then I will not go back on the medication. If there is no change I will resume the Arimidex for another three years.

Once we satisfactorily concluded that whole discussion we went on with the rest of the exam. Which consisted mostly of us talking about our children and college and degrees and the like. He was very exuberant about Katie’s choice of Music Therapy for a degree and field, which I found interesting. This medical doctor – a hard science, bio-chemical type medical doctor – is all atwitter about this up and coming field. To quote him, “It’s been around for a while, but just in the past few years there has been so much literature about its benefits. It’s a really great field.”

The rest of the appointment was pretty routine, including the run through Starbucks for the obligatory White Chocolate Mocha for the ride home in rush hour traffic. I didn’t really want the drink, but there was no choice. The car automatically turns out of the cancer center’s parking lot and drives straight to the ‘bux without any concern for my own will. Really. I was glad for it, too, because it took me forever to get home. Never, ever drive from the general direction of Philadelphia at 4:00pm during the work week. Ever.

The second unexpected twist in this chapter came the following day when I spoke to a genetic counselor on the phone to get Katie set up for genetic testing. After a fairly lengthy conversation she told me that I was the one who needed the testing since I was the one who had the cancer. This seemed so contradictory to everything I thought I had been told, but her explanation made perfect sense. If I test negative for the BRCA gene we will know my cancer was not genetic, which means there is no reason to test anybody else. If I test positive, however, then others in my family may wish to be tested as well, i.e., Katie, Taylor, my sisters, etc.

My thought (though obviously my thoughts are not to be trusted) is that this is not a genetic cancer. My mother’s breast cancer was protein positive/ hormone negative and mine was the exact opposite. Most likely if it was a genetic thing we would have had the same tumor make up. The counselor confirmed my thought process, though it’s still not a sure thing.

So in a week and a half I will be meeting with her at 8:00 in the morning -I should have asked if I could bring coffee because, well, you know. It’s me we’re talking about and 8:00 in the morning is early when you have to be clean and presentable. – to go over an in-depth family history and all the fine details about my cancer, my mom’s cancer, etc.

To close out this post I want to tell you about an event I went to the night after I wrote The Next Chapter. It was a community night of prayer for some of our local families. One family in particular is a preschool and church family and they were given a devastating blow this past September. Their third child, Eli, was diagnosed with Metachromatic Leukodystrophy (MLD) – a horrific degenerative disease with no cure. MLD is genetic and it was passed on to him by his unsuspecting parents. They then had the other three children tested and while the two older boys are carriers and don’t have the disease, their preschooler, Ella, does have the disease.

As I sat there listening to their mother, Becky, I thought how petty my gripes of the previous day had been. I would take Arimidex, or chemotherapy, or anything every day of my life if it meant my children wouldn’t have to suffer. The heartaches I have been through have no comparison to what this family has been through and will continue to endure. But what faith and strength Becky has. You can read about it at her blog, Fear Not.

As for this chapter, maybe I should stop trying to figure it out before I’ve finished reading it and just let God do his thing.

This entry was posted on Saturday, February 16th, 2013 at 11:42 pm and is filed under Aromasin/Arimidex, Breast cancer, Jenster, Side Effects, survivorship, Treatment. You can follow any responses to this entry through the RSS 2.0 feed. Both comments and pings are currently closed.