Thanks all who were praying today. I’m doing well. Digger indentation is gone and overall I can see a positive difference. The only hang-up I’ve had is itching. Once again I had an allergic reaction to the anesthesia and as I came out of my groggy slumber it became uncontrollable. The nurse and doctor tried to do as much as they could and were very patient and good to me. I don’t know if you’ve ever experienced itching to that extent….all over your body…but let me tell you….the word insanity comes to mind. I become a very different person….a crazed person. I told Jeremy….when it is at it’s worst….I feel like yelling like a crazy lady and grabbing my nurse and begging her to help me. It really is not fun. It has now happened to me three times. After my mastectomies, then reconstruction, and now today. This time it came on quicker and was probably the worst I’ve experienced. I wanted to rip the bandages off and itch everywhere like crazy. I would have invited anyone in the area to itch with me…..lol. What a funny picture that would be.  Everyone picking a spot and itching. But it would be downright gross. But Jeremy will scratch for me. What a good hubby he is! So the Benadryl only helped slightly so they got some hydrocortisone cream and we caked it all over. Finally, some relief. They decided then that I should stay the night. Much of the itching is gone thankfully. I’m on some sort of prescription and we rotate the prescription meds with the Benadryl every few hours and it keeps the itching under control, so now I can rest some.

On a good note. Before I went in to surgery Dr. D used his marker to plan out his strategy. On the sides where it pooches a bit under my armpit he suggested lipo’ing the area and asked if it was ok. Is it ok?  Is it ok?  He could do lipo on me anytime, anywhere! I would never not say yes to lipo anywhere but my breasts….lol! So he lipo’d my back fat and the sides of my hips a bit and after a tough cancer journey he gives me perks like this. He is genuinely a very kind man and a great surgeon. I am so grateful to have a surgeon who I really trust and who is helping me feel better about my disfigured body.

And if I sound super chatty and happy in this post, I am….lol.  Thanks to a little magic pill called norco I am feel’in real good….lol!  I’m just hoping I don’t come back and read this and realize how loopy I was.  Because then I get embarrassed by my misspelled words and sentences that don’t make sense….lol!  I have a good excuse:)

So I thought I’d share a few insight before I completely forget.  A few of you have emailed me and let me know you are headed for  a DIEP flap soon and I wanted to share a few thoughts and suggestions.  Before I had my surgery I sat down and talked with a wonderful woman named Gay here in Kalamazoo and she shared so much with me….I felt completely prepared going into the surgery.  Sometimes I think Dr. D thought I was clueless because I never asked any questions…..lol!  But the truth is….that Gay told me so much I felt like I knew what to expect.  So here I am, two weeks post-surgery and there’s a few things I thought I’d share.

1.  The tummy tuck is miserably painful.  Like….can’t move painful.  Some very kind nurses will gather around you for the next few days and hoist you back up as you creep down in the bed.  You will have no way to lift yourself to a sitting position.  Not to fear though….the first few days were the worst.  After a couple days it did get better.  I’m still in pain at two weeks but nothing like the first few days.

2.  After a day or so they wanted me to get out of bed.  My entire body felt like a ton of bricks.  I think this may have been when I thought….what have I done to myself.  But not to worry, every time you get up to walk it gets easier and your body does not feel like a ton of bricks forever.

3.  Bring chapstick.  In the first hours after surgery your mouth will be incredibly dry and they will only give you a sponge (like that does anything….lol).  I suppose 10 hours of surgery would make anybody dry.  You will want something for your lips in the days following.

4.  I was unpleasantly surprised that other parts of my body hurt so much after surgery.  I’d love to be a fly on the wall during surgery to watch what they do with you, but I suppose comfort is not their top priority.  I guess they put you in one position and leave you there.  I suppose operating in a lay-z-boy is out of the question.  When I came to, the insides of my arms and the back of my head hurt like the dickens.  I had ice packs everywhere.  Don’t be afraid to ask for those.  I’m sorry to say my arms are still healing from whatever strange position I was in….lol!

5.  You will look incredible!  Ok…I can’t gaurentee this.  But I am so happy to see my new curvy body in the mirror!  Besides this darn drain left, I can see that he took every bit of fat off my middle and I LOVE it!  I love having breasts…..and they feel great!

6.  You may start your period.  I did and the nurses told me it was quite common for women to star their period even though they might not be expecting it.  Nothing like bleeding from everywhere to make you feel great….lol!

7.  I am incredibly grateful that Gay recommended Dr. Dumanian and his dozens of residents (OK, maybe I didn’t love having all the residents looking me over, but how can I blame them for wanting to learn from him! )  I would never have guessed that I would have ever seen a plastic surgeon and I have so much more respect for the field!  Dr. Dumanian is well known for his work with prosthetic arms as well, so I’m grateful he has the time to put a stay-at-home, cancer survivor mom back together again and giving her and her family some normalcy.

7.  My email is listed in the “about me” section and if I haven’t answered all of your questions about what to expect with the DIEP flap, I would be happy to answer any questions you might have!

The Road to OK 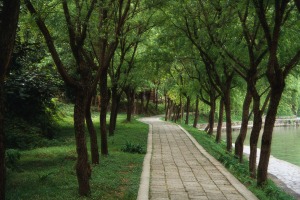 In the few weeks that I’ve been a cancer-card-toting member of this exclusive club, “Mothers with Cancer,” I’ve been amazed at (and sometimes intimidated by) the quality of the writing by the women here. As I read their stories and their essays and their poetry, I am moved by their writing abilities, for sure. I’m also moved by their ability to cope. But what I find especially moving is the solidarity I find here–the power of shared experiences.

Lately, some of us have been talking about acceptance. Read Jen’s “What Now” post or Laurie’s “on perspective” post or Stella’s “Validation” post. The common thread among these stories is that these women are seeking ways to understand, incorporate and accept their experiences. I, too, have been floating the idea of acceptance; of packing up my experiences and outcomes and moving on to the next town.

But this is where I have to come clean and say that I’m still sitting at the station. One day, I find myself ready to leave the familiar topics of bad hair days and bad boob jobs behind me. The next day, all I want to write about are my curls behaving badly and my girls gone wild.

Back in the day (a year ago), my blog was the hair and boobs show. I angsted about my hair. But that topic actually was a clever cover for my real angst–my reconstructed boobs. In a nutshell (no pun intended) I had my little, nearly-a-cup breasts removed by bilateral mastectomy, followed by expansion. The outcome? Here’s what I said last October, in the post Tits Are for Kids:

“It looks like the kids sucked the architecture out of your boobs,” my ex used to note. To his credit, he usually followed that observation with one of his basic tenets of life: Tits are for kids. It’s one reason I loved being married to my ex. While other husbands were sent into another orbit by an ample rack, mine seemed satisfied with an ample hip-to-waist ratio, which I was able to supply non-surgically.

These days I’m slightly tit-centric myself. I see breasts everywhere: in the double D-cup muffins at Starbucks, on the Bebe mannequins in the mall, under the Prana yoga tops at the gym, at my daughter’s middle school. On the first day of 6th grade, my daughter asked that I wait in the quad with her until a few friends arrived. While waiting, I noticed a mom with a blond pony tail wearing tight boot-cut jeans and a snug little black T, under which were perfect Barbie cones. “Dang,” I said to my daughter. “Do you think she’s a student? Try competing with that!” K. asked me to get in the car and go to work.

In other words, during my expansion I was as totally and completely focused on breasts as a pre-teen boy. They occupied a startling number of my waking and sleeping thoughts. And despite my best efforts to make sure my new-boob expectations were realistic, I was deeply dissatisfied with the physical outcome of my reconstruction.

The unveiling of my new breasts in my plastic surgeon’s office was probably one of the most difficult moments of my life. As the bandages came off and my flat, uneven “breasts” with the misplaced nipples were revealed, I held back the tears. The end of the long, hard road I’d traveled was unremarkable, forgettable, disappointing. I think one of the things holding me up during chemo and radiation was the vision of my new breasts–not like they were, but realistic enough for me to feel comfortable in my body again. When that didn’t happen, I fell into a deep, dark funk unlike any I’ve ever experienced before. All that postponed and suppressed grief came to the surface, demanding expression.

Since then, there have been moments when I thought I’d found complete acceptance. Moments in which I experience deep gratitude for my health and for a boyfriend who, like my ex, seems to see me as a complete (if not moderately damaged) package. Would he prefer that I had my original breasts? Yes. Absolutely. But he constantly reassures me that I’m “much more than my boobs.”

I felt a wave of relief when I finally made the surgery appointment for my reconstruction revision this November with a new plastic surgeon. I would love to say that I’ve moved on, that I’ve accepted the circumstances of my new life, which include very odd-looking breasts that may or may not be improved upon this Fall. The truth is, I don’t think I can do really do that until it’s really, truly done. Until someone says, “Jill, this is as good as it gets.”

Jen said in a comment recently, “work in progress, baby.” I want to believe that. I would like to join her and the others here in their ability to accept. For now, I’m waiting at the station in this little town. But, I’m grateful for the people who ocassionaly sit down next to me and share their travel stories.